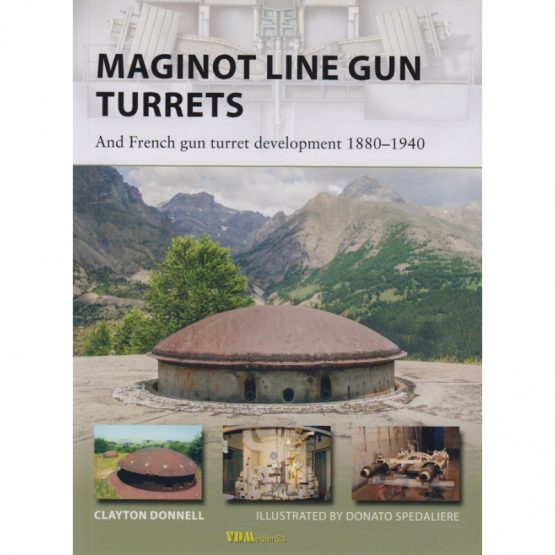 The Maginot Line was one of the most advanced networks of fortifications in history. Built in the aftermath of World War I, and stretching along the French eastern border from Belgium to Switzerland, it was designed to prevent German troops from ever setting foot on French soil again.

Its primary defensive weapons were the gun turrets. Beginning development in the 1870s and improving on German designs, they were constructed out of steel wedges and could revolve and disappear from sight after firing, making them impervious to enemy bombardment. They were deadly accurate and created havoc on the German units that attacked the line during their invasion of France in 1940.

This fully illustrated study will examine the technical details of the French artillery turrets. It will show the evolution of the design of the guns and turrets used in the French forts before and during World War I, then those built exclusively for the Maginot Line to give a comprehensive overview of the weapons designed to protect France from invasion.

Biographical Note:
Clayton Donnell has had a lifelong fascination with the fortifications of the Western Front. He spent his early years living in Belgium, and often visited the sites of the Brialmont forts. Over the years he has amassed a large collection of material relating to this period, and has translated much of it from French to English. He has previously co-written Modern European Military Fortifications, 1870-1950: A Selected Annotated Bibliography (Praeger, 2004), and has written Breaking the Fortress Line 1914 (Pen & Sword, 2013), and three books in the Fortress series for Osprey: The Fortifications of Verdun 1874-1917, The Forts of the Meuse in World War I, and The German Fortress of Metz 1870-1944.Donato Spedaliere was born in Lausanne, Switzerland, and moved to Tuscany, Italy, at the age of ten, where he still lives today. He has studied in Florence, and served in the Italian Army as a paratrooper. Since 1995, he has worked as a professional freelance illustrator for publishers in Italy and abroad. His artworks are to be found in many books, encyclopaedias, magazines, and museum collections. He is also a 3D artist, specialized as Matte Painter, Concept Designer and CG generalist.