The book shows the major role of aviation in the armed conflicts of the 20th century using the example of the Israeli-Arab Wars. It presents the primacy of the effectiveness of modern Israeli aviation, which is generally equipped with state of the art equipment and well-trained personnel, on Arab aviation which was based primarily on numbers rather than quality. In these activities, Israel has shown the perfect example of ¿Blitzkrieg¿ strategy which within a few hours enabled it to annihilate the more numerous Arab forces with its modern and well-trained aviation. It also describes the history of the rise of Israeli aviation, including its many Polish-related topics.

The conflict between Israel and the Arab states has been continuing with varying intensity for about 100 years (and in some cases since much earlier times).

Undoubtedly, this is the longest armed conflict in the twentieth century and one of the longest conflicts in history.
The dispute over the identity and shape of the territory of Israel is one of the most difficult, and the international community has still not managed to formulate a final opinion on this. After their tragic experiences (especially during the Second World War), the Jewish community decided to create their own state using a “fait accompli”. In 1948 there was a war, as a result of which the independent state of Israel was established within the former British Mandate of Palestine.
Arab states recognized this as a humiliation and started a virtually endless war aimed at its elimination. It was (and largely still is) a struggle based mainly on ideological and religious lines. Egypt and Syria had not, in fact, such large material interests in the destruction of the Jewish state, the more so that these wars were associated with huge costs. From a financial point of view, they would benefit a lot more if instead of starting a war, they would have commenced economic cooperation with Israel. In the conditions in the Middle East, this was impossible. The only Arab ethnic group which may have physically gained something from defeating Israel were the Palestinians, but they did not play a major role in the Arab-Israeli wars. The first glimpses of potential cooperation (or at least lack of open war) between Israel and Egypt appeared only as a result of the agreement at Camp David in 1978. After decades of costly wars with Israel, Egypt had to recognize that the defeat and destruction of the country was simply impossible and took the practical decision to discontinue open war. From then on there has been relative peace between Israel and Egypt.

The fight against the Jewish state continues to be led by Syria, which significantly reduced its effort after losing the war in Lebanon in the mid-80s, later fighting on the border between Israel and Syria were already far less intense. Currently, Syria is engulfed by civil war, and the focus of its policy is aimed at completely different goals than the struggle against the state of Israel.
Other Arab countries also participated in the wars against Israel (especially Iraq), although the practical cessation of fighting by Egypt also significantly weakened their actions.
Israel, since the beginning of its independence, has acknowledged the great role of the Air Force. The Israeli air force played a leading role in all open wars conducted by the State. Israelis not only tried to equip their armed forces with the most modern aircraft possible, but also drew conclusions concerning the application of the principles and doctrines of the Air Force. The excellent results achieved by Israel’s air force confirm that these conclusions were correct.
Arab-Israeli Wars were also a form of fighting between NATO and the Warsaw Pact, because their weapons were tested there. Israel received arms of Western production (initially French, then American), and the Arab states of Egypt and Syria from the beginning were supported by the Soviet Union and its Warsaw Pact allies. The results of these wars demonstrated the superiority of military techniques and philosophy derived from the West. They assumed the primacy of quality and modernity above numbers, which allowed Israel to inflict huge losses on the Arab armies and defend its own independence.

Chapter I of this publication describes the history of the Air Force of Israel and Poland-related topics of countries of the Middle East. Polish themes there were indeed symbolic, but for Polish readers they may be very unfamiliar curiosity. This chapter describes the development of military aviation in Israel since the early aviation organizations in the British Mandate of Palestine in the 30s up to the present day. In addition, this chapter also contains information on Polish exports of aircraft to countries taking part the Israeli-Arab wars as well as co-operation between the Polish air force and Israel, and also other issues related to this.
Chapter II describes the course of aircraft combat during some of the conflicts between Israel and the Arab states. It deals with the Suez Crisis of 1956, the Six Day War of 1967, the Yom Kippur War of 1973 as well as over the Bekaa Valley in Lebanon in 1982. In addition, it describes the probable course of the air war between Israel and Syria at the turn of 20th and 21st centuries. If source materials on the conflicts up to the mid-80s are plentiful, to find references on present struggles from about 2000 is very difficult. They are, in fact too recent events for all information on this topic would have been open to the public. Only specific mentions of the subject get into the media. On this basis we have attempted to present those events.
We have skipped the subject of civil aviation, except for civilian aircraft bearing registration numbers of the British Mandate of Palestine, on which the first Jewish pilots in the late 30s trained.

Israeli Air Force and Polish themes in the Middle East Air Forces
1.1. The beginnings of aviation in the British Mandate of Palestine

The first aviation activity in what is now Israel during the interwar period was run by the British armed forces and several civilian air carriers, including the Polish Airline “LOT”. The Polish national carrier had limited possibilities of servicing west and east of Europe, so it focused on the north-south direction.
One of the greatest achievements of the PLL “LOT” in the interwar period was launching flights from Warsaw to Lydda in Palestine in 1936 with only one stopover. The route was over 3,000 kilometres via Hungary, Yugoslavia, Greece (with a stopover in Athens), then across the Aegean Sea and the Mediterranean Sea. The longest stretch from Warsaw to Athens amounted to 1,674 km and was carried out at night, lasting 6 hours. Only nine airline companies could afford such an operation, which required modern equipment and highly qualified personnel. The Palestine connection was handled by the most modern aircraft of the “LOT” fleet, including Douglas DC-2. This route was organized in cooperation with the Polish Jewish community. It was not the end of the airline cooperation between Poland and the Jewish community. In Palestine, the RWD-8 RWD 13 and RWD 15 aircraft were also used, some of which took part in the Israeli War of Independence in 1948. It cannot be ruled out that Jewish airmen of Polish descent fought there. Fighting between the Jews and Arabs living in the Palestine mandate had been continuing with varying intensity for a long time. They gained the greatest momentum, however, after World War II, and finally turned into open war. On the Israeli side was a military structure called Haganah which eventually received its air component. In the autumn of 1947 the Jewish community began to prepare for the Arab invasion of Palestine, which would result in the total annexation of the disputed territories, and prevent the emergence of a Jewish state.

Two weeks before the UN voted on Palestine in November 1947 the Haganah had created the first Jewish Air Force (Sherut Avir, Hebrew. שירות האוויר). They consisted initially of 25 light aircraft on loan from the Jewish airlines “Aviron” (including two Polish RWD-8 / VQ-PAG and VQ-PAK / two RWD-13 / VQ-PAL and VQ-PAM / and one RWD-15 / VQ-PAE /) and only eleven pilots. They also managed to buy a number of other aircraft, including two Taylorcraft Model C, about 20 Auster A.O.P. light observation aircraft (most officially in private hands), one DH.89 Dragon Rapide (VQ-PAR “Aron”) and two DH.82C Tiger Moth (VQ-PAU and VQ-PAV) from Canada. Officially, they were used by the Aero Club of Palestine and in the light of official data were not part of the Sherut Avir. With these aircraft the Jews were trained in 1939 as the first group to own a pilot’s travel license. Most likely, they trained on the Polish aircraft RWD-8. These forces were also used to carry out reconnaissance and air supply for cut-off Jewish communities.
The secret organization Haganah (Defense) was founded in 1920 by Vladimir Jabotinsky (Żabotyński). It was established to defend the Jewish population from attacks by Arab militias, whose attacks had intensified in 1936–1939. The main tasks of the Haganah were the acquisition of weapons, training fighters, and intelligence. During World War II, the Haganah supported the British and had its agents in many countries. This organization also created its air force in 1947. Initially, the air force of the later state of Israel was based on complete improvisation.

The first bases of the newly formed Sherut Avir were mainly the Aero Club of Palestine and the “Aviron” company – both were under the total control of the Haganah. A network of relatively well-prepared airstrips was also available (which had been created by the Jews in Palestine since 1937) and about 2,500 people (of both genders), many of whom had experience of service with the Allied armies and air forces. Perhaps some of them had served in the Polish Air Force in the West. A number of pilots of Jewish origin was surely also present in the Polish aviation regiments in the USSR.
The first chief of staff Sherut Avir was Aharon Remez. In 1948 Sherut Avir acquired the first of three Beechcraft Bonanza aircraft bought by Boris Senior – a former British military pilot from South Africa. Officially, the aircraft was flying on a tourist trip to Europe, but landed in the Negev desert, where bomb racks were installed. Soon after Sherut Avir acquired heavy transport planes. American Jewish A. W. Shwimmer (pilot and flight engineer) bought in the US ten Curtiss C-46 Commando aircraft and three Lockheed L-049 Constellation from USAF storage. They were then registered in Panama. They were used, among others, to bring weapons to Israel. For example, L-049 with the Panamanian registration number RX-121 when flying through Europe, was involved in the transport of weapons from Czechoslovakia.
In addition, during the seven months of Sherut Avir’s existence (from November 1947 to May 1948) the aviation of Haganah received many other aircraft. In March of 1948, Haganah commandeered a Fairchild F24R (UC-61) belonging to an Egyptian drugs smuggler. In May, they purchased three DH.89 Dragon Rapide in the UK. An RC-3 Seabee float plane and three C-47s were purchased. Also four Avro Anson training aircraft were bought, but these were interned in Greece. In Israel, there were also a number of Lockheed Hudson Mk III and Lodestar aircraft. On April 13 the only RWD-15 was burned at the Lod Airport as a result of sabotage. 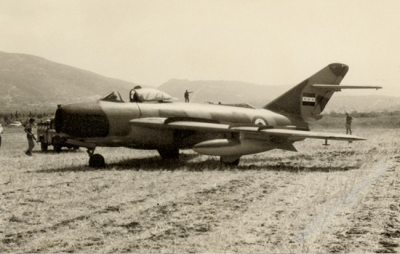